The Faroe Islands and Iceland share the same realities

Minister of Foreign Affairs and Culture Mr Jenis av Rana yesterday took part in the opening session this year’s Arctic Circle Assembly in Reykjavík. In his speech, Jenis av Rana emphasised the need for strong regional cooperation amongst the neighbours in the Arctic regarding the sustainable use of natural resources, noting particularly the strong ties between Iceland and the Faroe Islands.

“The strong historical and cultural bonds between our two countries can be extended to all the peoples of the Arctic. We share many of the same realities. Our long experience making a life in untamed and harsh natural conditions has taught us to be practical, resilient and adaptable. We know from personal experience that when our natural environment thrives, we thrive,” he said.

Jenis av Rana also suggested that children have an especially important role as custodians of the valuable natural and cultural resources.

“Focusing on the welfare and education is our best investment. We must encourage and support them in taking forward our common responsibilities. Because I firmly believe the Arctic nations can lead the way in showing how our common challenges of distance, climate and demographics are not obstacles. They are drivers of innovation and sustainable development.”

The Arctic Circle is the largest network of international dialogue and cooperation in the Arctic. It is an open and democratic platform with participation from government, organisations, corporations, universities, think tanks and others interested in the development of the Arctic. 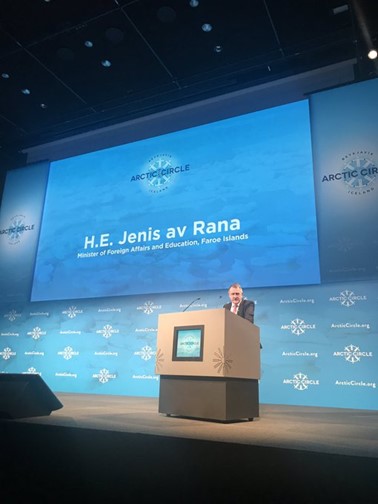 Foreign Minister of the Faroe Islands Jenis av Rana at the opening session of Arctic Circle.