In the new Government, parties spanning the political spectrum from the centre to the right intend to make the Faroe Islands an outstanding society.

The government’s main priorities, in heading for economic, financial, social and regional stability, are:

The Ministers of the Government:

In its first session since the election of 31 August, the Faroese Parliament appointed Bárður á Steig Nielsen, chairman of the Unionist Party, as the Prime Minister of the Faroe Islands.

In his address to the Parliament at the weekend, the Prime Minister said:

“Fourteen days ago, the people of the Faroe Islands chose a new course – a course where we get back on track, a course with security and stability. The Centre Party, the People’s Party and the Unionist Party have now set this course. “

“The world is experiencing great change. On a domestic level, the demands on us as a society become ever greater. Considering these demands and challenges we need to commit to long-term political agendas as well as tangible innovation and reforms.” 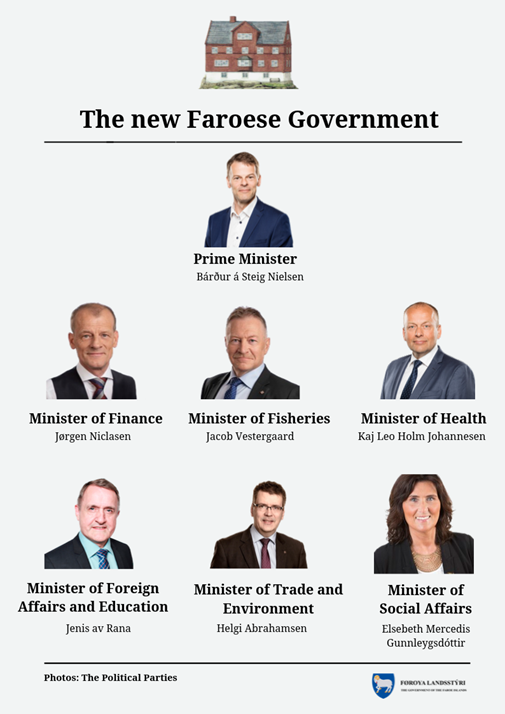 The Prime Minister in brief

He is married to Rakul Nielsen (née Lamhauge). They have four children and live in Vestmanna.

Mr Nielsen is an accountant by training and has in recent years held the position CFO in a telecommunications company.

Since October 2015 Mr Nielsen has been the party leader of Sambandsflokkurin, The Unionist Party.