The Prime Ministers of the United Kingdom and the Faroe Islands, Boris Johnson and Bárður á Steig Nielsen have agreed to strengthen trade and cooperation between the two countries, during a meeting between the two leaders this morning at Number 10 Downing Street.

Prime Minister Nielsen remarked that, “Brexit enables new opportunities for cooperation between our two countries. It is vital that we exhaust all options and explore every avenue to ensure the best possible relations. The meeting with Prime Minister Johnson is a clear sign that the British government values cooperation with the Faroe Islands. I am confident that the Faroe Islands will build stronger trade relations with the United Kingdom, as it prepares to leave the European Union.”

Prime Minister Nielsen made clear during the meeting that the Faroe Islands would like to broaden existing bilateral trade relations. The discussion also touched on cooperation in a number of industry sectors, including fisheries, energy and services.

Prime Minister Nielsen also explained that 2020 marks the 75th anniversary of the end of the British friendly occupation of the Faroe Islands at the conclusion of the Second World War.

“The Faroe Islands and the United Kingdom have a shared history of friendship and collaboration. Great Britain is our closest neighbour and we need to continue to strengthen and develop our good relations as neighbours in the North-east Atlantic”, Prime Minister Nielsen added.

He also took the opportunity to invite Prime Minister Johnson to visit the Faroe Islands. 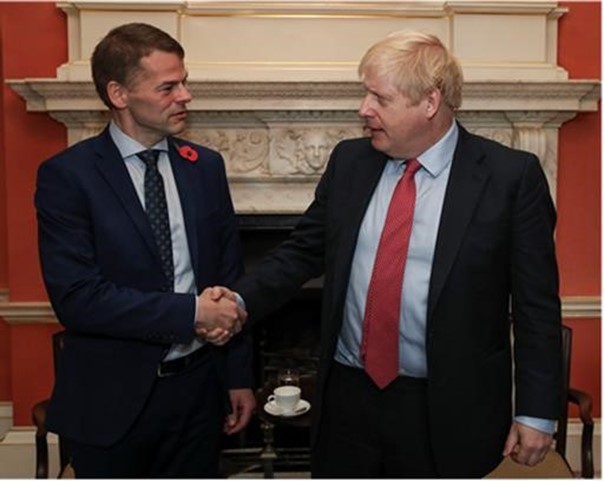